Tickets
Museum Hours
Thu–Mon: 10 AM–5 PM
Tue–Wed: Closed
Location
200 Larkin Street
San Francisco, CA 94102
415.581.3500
Become a Member Plan Your Visit Shop
Tickets
Objective: To teach a responsibility for self-advocacy while celebrating diversity, students will generate ideas about what will make their lives better, will create placards based on their ideas, and share their ideas in a "protest" march. 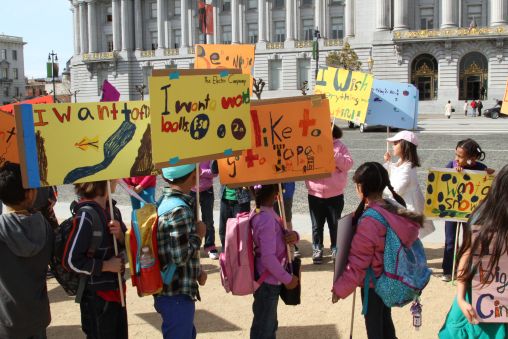 Comon Core Standards:
Grade 1 Writing: 1.) Write opinion pieces in which they introduce the topic or name the book they are writing about, state an opinion, supply a reason for the opinion, and provide some sense of closure; Speaking/Listening; 1a.) Follow agreed-upon rules for discussions (e.g., listening to others and taking turns speaking about the topics and texts under discussion); Presentation of Knowledge and Ideas: 1.) Participate in collaborative conversations with diverse partners about grade 1 topics and texts with peers and adults in small and larger groups; 5.) Add drawings or other visual displays to descriptions when appropriate to clarify ideas, thoughts, and feelings.

Content Standards (California): History Social Science: 1.5 Students describe the human characteristics of familiar places and the varied backgrounds of American citizens and residents in those places: Recognize the ways in which they are all part of the same community, sharing principles, goals, and traditions despite their varied ancestry; the forms of diversity in their school and community; and the benefits and challenges of a diverse population; Visual/Performing Arts: Grade 1: 4.2 Identify and describe various reasons for making art;  Grade 2: 3.1 Explain how artists use their work to share experiences or communicate ideas; 4.1 Compare ideas expressed through their own works of art with ideas expressed in the work of others; 4.2 Compare different responses to the same work of art.

Extension: Students who finish early can fill a small soda bottle with 5 marbles and tape it to their sign to create sound during the march/chant.

Preparing for the March (20 minutes)

Sharing with the Children’s Pride Community

About Children’s Pride and Takayuki Yamamoto:

Takayuki Yamamoto is a mixed-media artist who satirizes the roles of institutions by facilitating creative experiences that place children in positions of power. With Children’s Pride, Yamamoto critiques collective demonstrations by exposing that through the action of solidarity, individuals lose their agency. The focus of his critique isn’t the function of a demonstration, but rather the tendency of people to join or jump on the bandwagon without clearly understanding the nature of the position/cause they are taking.

Yamamoto prefers to work with children because, “they know what they want, can hear their primal need, and are really flexible. Adults are opposite. They don’t know what they want and aren’t flexible at all. Formal education as a system, imposes and shapes a way of thinking that is based on the past ideas and experiences. This hinders the free thinking that children will need to create the future.”

Yamamoto hopes to instill a sense of self-awareness and advocacy for what individuals want, while encouraging them to celebrate the uniqueness of each student’s individual identity. “Everyone is different and that is good.” Through this collective space, he also hopes to promote a respect for individuality not only in one’s classroom community, but across the world.