Part of a long archipelago off the eastern rim of the Asian continent, the island country of Japan has four main islands: Hokkaido, Honshu, Shikoku and Kyushu. Learn more. 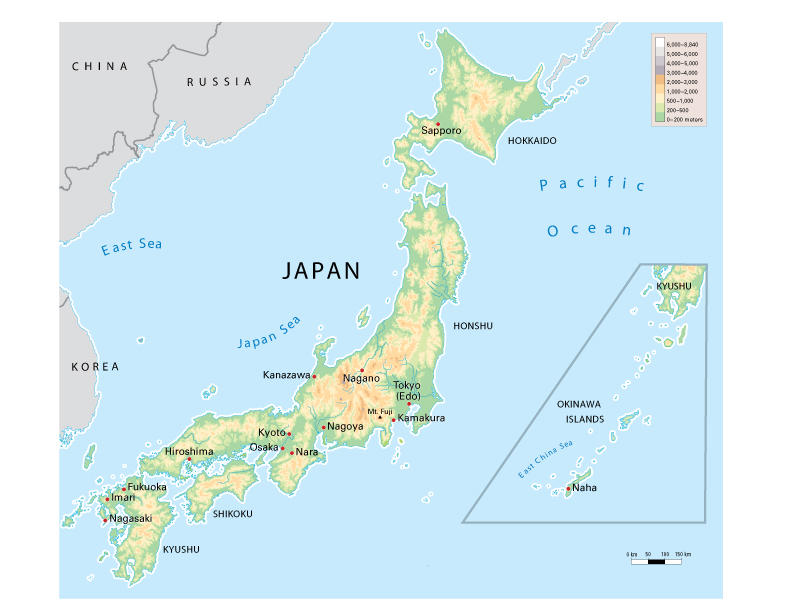 Japan is an island country consisting of four major and numerous smaller islands. The islands lie in an arc across the Pacific coast of northeastern Asia, forming a part of the volcanic “Rim of Fire.” From north to south this chain of islands measures more than 1,500 miles, but it is only about 130 miles across; its total landmass is just under 150 thousand square miles. If placed alongside the Pacific coast of North America, the Japanese islands would extend from northern Washington State to the southern tip of Baja California in Mexico, and as a result Japan has a wide variation in climate.

Japan’s closest neighbors are Korea and China. In early history the Korean Peninsula acted as a bridge between Japan and the vast expanse of China, where a great civilization emerged—later on, Japan made connections with China directly by sea. As an island people, the Japanese have been aware of their physical isolation since ancient times, and this isolation has had many positive aspects. For much of Japan’s history, the seas protected it from invasion. The Japanese also controlled international contact by expanding, narrowing, and sometimes terminating diplomatic relations with other nations.

Despite such concern with managing contact with the outside world, many Japanese have admired, been curious about, and studied aspects of foreign cultures whenever they have reached their home shores. During closed periods, they digested foreign influences and, based on their tastes and necessities, transformed those influences into distinctly Japanese forms and styles.