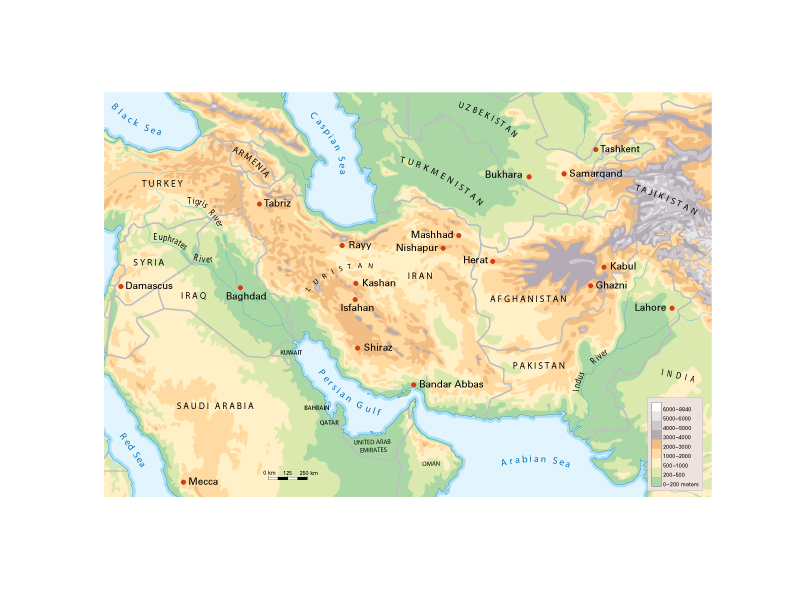 Map of the Persian World and West Asia

1
1
Map of the Persian World and West Asia

Map of the Persian World and West Asia

Iran’s rich history stretches back to about 8000 BCE, when the first settlements appeared in western Iran and the Caspian sea. The first great pre-Islamic power was founded by Cyrus the Great (approx. 550 BCE). The name of his homeland, Parsua (modern-day Fars, in southern Iran) was rendered by the Greeks as Persis. The name Persia, which is the word Alexander the Great used for the region when he conquered it around 330 BCE, is derived from this. The country was known as Persia until 1935, when its government asked other nations to use its Persian name, Iran.

Arab invasions from the west and the arrival of Islam after 640 brought Persia into contact with the larger Islamic world. Persian administrative practices were adopted by the first Arab Islamic states, and Persian teachers were brought to the cities such as Baghdad to tutor Arab princes. Both the later Ottoman empire (1300–1922) which controlled what is today Turkey and the surrounding regions and Mughal empire (1526–1858), which controlled present-day Pakistan, Afghanistan, and much of India, adopted Persian as their official court and administrative language. Arab and Persian merchants traded goods in much of Asia, spreading Persian literature, architecture, and decorative arts.

One of the most influential Muslim dynasties to emerge in Persia was the Safavid (1501–1732). Isfahan and other Safavid cities became production centers for such items as carpets, silks, and Chinese-inspired porcelains. These goods were traded in other parts of Asia as well as in Europe, where they were valued as exotic luxuries. The Safavid ruler Shah Abbas (1588–1629) went so far as to bring Armenian Christians to Persia to facilitate trade between Persian Muslims and European Christians.